Postscript (23 Apr. 2012): We have learned that Roger Tirrell bapt. 1592 at Petersfield was not the father of our Roger1 Terrill, so consider the first two paragraphs of this article out-of-date. See Roger Tirrell baptized 1620—the final chapter for details.

All highlighted and underlined items in this article are links to DOR newsletter articles or online references.

We don't yet know that our Roger1 Terrill was a grandson of this Roger Tirrell, but it's a distinct possibility. So consider this the story of a person who may very well have been the grandfather of our Roger1... and perhaps we will someday soon make the connection.

Our present leading candidate for the father of Roger1 Terrill of Milford is the Roger Terrill who was baptized 19 November 1592 in Petersfield, county Southampton (now Hampshire), England. This Roger and his family are discussed in this DOR research article. As the article outlines, our Roger1's possible grandfather, another Roger Tirrell, was christened in East Meon, county of Hampshire on 24 December 1565, and it is that Roger who has attracted our attention.

Petersfield is an ancient market town and borough, situated in the midst of an extensive agricultural district at the intersection of trade and pilgrimage routes. It became an important stopping point on the way from London to Portsmouth and provided inns and horses for travellers, including Henry VIII when he first visited his favorite ship, the Mary Rose.a East Meon lies about five miles west by south of Petersfield in a pleasant valley near the source of the Meon rivulet.b 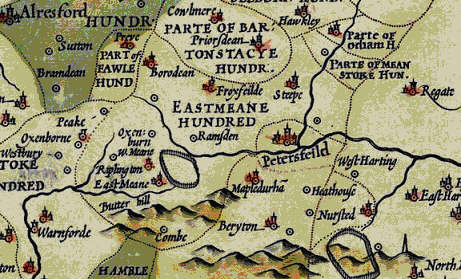 In the sixteenth and early seventeenth centuries Petersfield inhabitants were heavily involved in tanning and the manufacture of cloth from wool, as in nearly every court roll there occurs a list of tanners fined "for using fraud in their trade." And, it is in these court rolls that there is mention of Roger. On the court roll of 1603 "occurs a presentment against certain persons for polluting the river and throwing their sheepskins into it ..."... again in 1605 "John Mylls, Roger Terrell, and others were warned not to wash their inwards** and Lawrence Gudge his dossers, 'to the great annoyance of a great many poor men,' in the brook in the Brook Lane under penalty for each offence of 3s. 4d."c Footnote 29 Since Roger and others were annoying "a great many poor men," it is inferred that Roger was not a poor man. This seems to be the case as Roger's fine for tanning practices was a small matter compared to his other legal adventure as a burgess* and mayor of Petersfield, the outcome of which would impact all of Petersfield.

As Petersfield prospered in the sixteenth century the burgesses sought greater independence and wealth and acted in a corporate capacity.... taking rents and making grants of lands; causing houses to be erected on waste land which they let for money rents; accounting themselves the owners of the fairs and markets by collecting toll, picage and stallage; sometimes seizing felons' goods to their own use; and holding the three weeks' courts themselves. Roger was one of these burgesses.

All of these profitable enterprises had not been challenged by the absentee borough lords, the Westons. All of that changed when Thomas Hanbury, who lived in a neighboring parish, purchased the borough from the Lord Weston in 1597. "After the Hanburys obtained an interest in the borough, it became a subject of dispute between them and the town, whether the mayor and burgesses were entitled to the waste lands of the borough, the tolls of the markets and fairs, and the profits of the borough courts."d pp. 12-13 Determined to maintain his rights, Hanbury appointed his own men to enforce them. But the burgesses were also determined to maintain their ownership status.

For example, when Hanbury's man went to the town hall in 1601 to keep the three weeks' court in the name of Lord Hanbury, "he was prevented from doing so" and was thrust from the room, which was done "with great violence once or twice." Hanbury's collectors of the picage and stallage were moreover hindered in the execution of their duties by the burgesses, who in addition, refused to pay any rents for the borough save as a fee-farm rent.c

At length, in the Easter term of James the First, 1608, Thomas Hanbury filed his Plaintiff's bill d pp. 231-234 in the Court of Exchequer setting forth:

.... "that one Roger Tirrell and several others who unjustly pretended to be burgesses of the borough, having by casual and other means got into their possession divers deeds, charters, writings, books of survey, court books, and other evidences, by colour thereof had entered on sundry parts of the waste grounds and other lands of the complainant, and built thereon cottages and houses... to defraud and disinherit him: That they had hindered him from keeping his courts within the borough, and refused to pay him the yearly rents, duties, services, and customs belonging to him: That although he was entitled to the fairs and markets, the defendants had refused to permit forayners, and such as come to the markets and fairs to have pickadge and stalladge unless they paid....." d p. 13***

Roger and the other burgess defendants countered d pp. 234-239 the following May:

"That Petersfield had, time out of mind, been an ancient borough, and had found and maintained two burgesses to the Parliament: That the mayor and burgesses were seised in fee-simple of the borough, paying the fee-farm of seven pounds and fourteen pence yearly, to those whose estate the complainant then had, and that they had paid that rent to Sir Richard Weston and his ancestors for a long time: That the mayor and burgesses, during all the time of their memory, had been accounted owners of the borough, and had built, in fit and convenient places within the streets of the borough, divers houses, buildings, and shops, part whereof they had demised for certain terms of years, rendering a rent to them and their successors...." d pp. 13-14

The defendants produced evidence to prove the borough was an ancient one with tenants paying ancient burgage rents and that the mayor and burgesses had for a long time been a body corporate in the affairs of the borough.c In many of the documents related to this dispute, Roger Tirrell was given the title of mayor, or "maior," of Petersfield.d pp. 105, 234, 239

However, it seems that the corporate authority claimed by Roger and his fellow burgesses, by way of charter, could not be proven. "From a very early period, an officer of the borough called 'the mayor,' has been annually elected by the leet jury and sworn in at the court usually holden in January. But a royal charter of incorporation seems never to have been granted to the town, as none could be found after a most careful search...."d p. 10

Thus, the court decree in Michaelmas Term, 1610, titled "Hanbury v. Tyrrell," d pp. 259-264 was "completely in Lord Hanbury's favor"c, and the burgesses as a "body corporate" lost the case. This case was brought forward in 1820 when Petersfield's mayor and the inhabitants of Petersfield got into a legal dispute over voting rights. After a lengthy wrangle it was determined in May of 1821 that the freeholders of lands, or ancient dwelling houses, would elect the burgesses to parliament.d p. 180

Roger's son, Roger (b. 1592), removed himself to London and involved himself in commerce there, as recounted in this DOR research article. This was probably due in large part to the fact that after Hanbury won his case the prospects for Petersfield and the burgesses were greatly reduced... "from the loss of this suit dates the gradual decline of the borough."c

*Burgess originally meant a freeman of a borough in England. It later came to mean an elected or unelected official of a municipality, or the representative of a borough in the English House of Commons.e In Petersfield borough in the late 1500s and early 1600s, because of the many administrative and revenue-producing prerogatives exercised by the burgesses, they were either elected or unelected officials. Petersfield also sent two burgesses to the English House of Commons. In the 1608 suit Hanbury named the burgesses, i.e., "Roger Tirrell, John Colebrooke, William Paglesham, Gregorie Triggs, James Mills, John Salter, Gregorye Page and William Forde whoe unjustlie pretende themselves to be burgesses of the said burroughe of Petersfield..."d p. 232

**The word "inwards" means the insides of sheep or cattle or their hides, close in meaning to "innards." The dictionary gives one definition as "located within the body: the inward parts."

***The date of 1611 for the Plaintiff's suit on page 13 is in error, and should be 1608. See the transcription of the document on page 231 and the account in British History Online, reference "c" below.