This tree is part standard paper trail genealogical and part yDNA STR-mutation* genetic. It is similar in form to the human phylogenetic tree defined by SNP mutations, but covers a much shorter time frame due to the much higher mutation rates of STRs (compared to SNPs). The tree, which contains a great deal of information in condensed form, is easy to comprehend if you take a moment to learn how. As more and more people get yDNA-tested it will contain more and more mutation branch points (individuals in bold red), enabling easy identification of descendants of those persons through their yDNA test results, since those test results will all show that same mutation. All the mutations found so far in the yDNA test results of our YDNA Roger group are shown on the chart in red. The meaning of the mutation annotation is easily explained by an example: (456-) means that a mutation occurred at marker DYS 456, decrementing the marker value by one. All but one of these mutations have yet to be assigned to a particular person. All we can say about the unassigned ones is that each occurred at some person along a span of a few generations. The number of generations between a pair of individuals on the chart is given as the number in black on the line connecting the two. For example, there are three generations separating GETerry from Wm. E. Terry b. 1818, meaning that GETerry is the great-grandson of this Wm. E. Terry. The names in blue signify that we know (or have deduced) the yDNA test results for those individuals, to at least 37 markers (most to 67 markers). This includes all of our YDNA Roger group (the column on the right), of course, and Roger1 Terrill himself, and a number of people in-between. 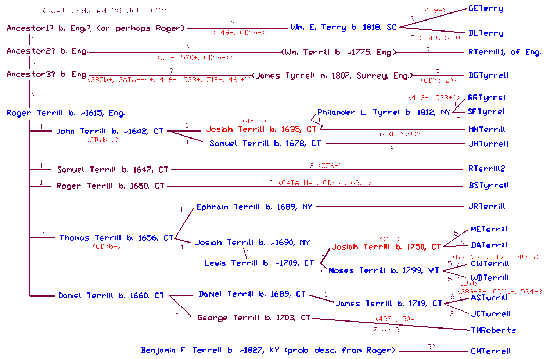 * A single-nucleotide polymorphism (SNP, pronounced snip) is a mutation of a single nucleotide base pair in a DNA sequence. For instance, the mutation of a C-G base pair to a T-A base pair. (See Wikipedia: single-nucleotide polymorphism for a good diagram and more explanation.) A short tandem repeat (STR) is the repetition, some number of times, of a short nucleotide sequence such as TAG. In yDNA test results the "markers" are all various STRs in the yDNA molecule, and the marker values are the number of repetitions of the short base pair sequence in that STR. (See Wikipedia: short tandem repeat for more detail.)

1. Most of the markers mutate so slowly (once per 100 or more generations) that a mutation is definitive on our chart. The CDY markers (CDYa and CDYb), however, mutate much faster (once every 28 generations, on average)—consequently there are many such mutations, both forward and backward, on our tree, and it is often difficult to say for sure what has happened.

2. The Terry line: GETerry and DLTerry may be descended from an ancestor to Roger1, or else from Roger1 himself. Most likely (we think) a first 449- occurred prior to Wm. E. Terry b. 1818, and a second in the GETerry line after Wm. E. Terry.

3. RTerrill1 of England is believed to descend from an ancestor to Roger1. The three mutations in his line could have occurred before, at, or after Wm. Terrill b. ~1775. Or it could be that reverse mutations occurred in Roger1's line, prior to or at Roger1.