What Do We KNOW About Roger1 Terrill

New Developments! (28 Apr. 2009): The DOR2 research project has investigated the Banks references, and our theory of the Copthall connection is currently under revision. You can find reports of new research on our front page.

A great deal has been written about the origins of Roger1 Terrill of Milford, Connecticut by 1639. Regrettably, too much of the information is speculation, and the repeating of that speculation.


There are, however, clues to the identity of our mysterious Roger1 in England.

This book was compiled from Banks copious notes after his death. The writer obtained from the Library of Congress (where this Banks manuscript is on deposit) Banks exact notes for Roger1.

This information on Roger1 shows him as being from Wapping AND Copthall or Copped Hall(Essex) referenced by P.R.O. Subsidy 142/279, Co. Middlesex, 18 JAE I, i.e., 1625. The Public Record Office in England confirmed this referenced document was archived at their Chancery Lane, London facility (reference E179/142/279) but that this original document is in extremely poor condition and the Roger Terrill entry could not be confirmed. 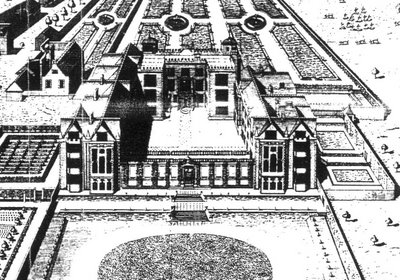 So, we are left to count on the notes made at an earlier time by Banks when the records were readable. From Bank's entry we can surmise that either Roger1 had property in London and Essex, or, that Wapping was his point of departure from England as Wapping (which is in the borough of Stepney) was between the London Docks and the Thames river.
Copped Hall 1735

Copthall, also known as "Copped Hall," was located 2 miles southwest of Epping in the Hundred of Waltham in Essex. The Subsidy Roll reference 179 covers the Waltham Hundred.

In 1629, King Charles I dissolved his Parliament leaving him without a way to raise taxes for the outfitting and building of ships. So, he decided to impose a "ship tax" directly on landowners, in peacetime, and without their consent. The Essex Ship Subsidy Money Rolls for 1636 show in the Waltham Hundred a "Roger Terrell" as a taxed property holder. No payment of this tax could be found.

King Charles' demand for ship money was met with resistance. In his A History of the English People John Green explains: "There were men who saw the danger to freedom in this levy of ship-money.... The bulk of the country party abandoned all hope of English freedom. There was a sudden revival of the emigration to New England, and men of blood and fortune now prepared to seek a new home in the West." Roger1 may have been one of these men.

We also know that the family of Roger1's wife, Abigail Ufford, emigrated (father is Thomas Ufford) in 1632 on the "Lyon" to Boston, settling initially in Roxbury. They then migrated to Springfield 1636, Wethersfield 1640, Milford 1644. Family baptism records in England show they were of Nazeing in Essex as of June 1626. Nazeing is located in Epping, the Waltham Hundred, 5 miles North by East of Waltham Abbey. (More on Abigail Ufford in a later post.)

According to Edward R. Lambert's History of the Colony of New Haven, "The original settlers of the place [Milford] were mostly from the counties of Essex, Hertford and York. A number of them came to New England with Messrs. Eaton and Davenport's company, and remained with them at New Haven during the year 1638. Their pastor, Mr. Peter Prudden was from Edgeton, Yorkshire and probably most of these planters were from Yorkshire and Herfordshire where Mr. Prudden had preached previous to his emigration. Soon after their arrival at New Haven, his company projected a settlement at Wepowage [Milford] and while they were making preparations to commence the settlement, he preached with the people of Wethersfield, who at that time had no minister. While he officiated there, a number became so attached to him that when he left they accompanied him and incorporated with his church. These were before from Watertown, Massachusetts, and were a part of Sir Richard Saltonstall's company from Essex England."

Roger1 was an "after" planter in Milford. The original town records were destroyed after being copied in 1677 by a committee appointed "to transcribe out ye old books what is necessary and of use."

Their abstract of the earliest Milford land records shows on page 1 that as of 20 November 1639 there were 44 free planters. Following this list are the names of 9 persons, including "Roger Terrel." These nine recorded immediately after the 44 were not in the church fellowship which was a requisite qualification for being admitted as a "free planter." The thing that seems clear is that the 44 and 9 were all considered settlers by 1639 by the committee as page 2 takes up the year 1640.

It was in 1639 that the church at Milford was organized at New Haven. On 18 April 1640 Rev. Peter Prudden was ordained pastor of the Milford church. Roger1 Terrill first shows up in the Milford church records 25 July 1644. Later, Abigail Terrill wife of brother Roger was admitted 3 November 1644

So, if Roger1 wasn't in the Milford church fellowship in 1639 what did that mean? Was he then a Church of England man, or even a non-church member? It is even possible he was, or had been, a Catholic, a fate almost worse than Puritanism in post-Elizabethan England. In F. G. Emmison's Elizabethan Life-Morals & the Church Courts, he discusses recusancy and lists some of the notable Essex Catholic families, including the "Tyrrels of several parishes.

Yet, taking all of the above into consideration, there still is no proof of Roger1's origins in England. There is no manifest or passenger list with his name, no will in England linking him to the New World... in short, although theories abound, some so often repeated they almost have the force of certainty, to date Roger1's origins remain unknown.

In the writer's opinion, the Banks reference of Copthall, and the 1636 ship tax listing in the Waltham Hundred which is in close proximity to the origins of his wife's family in Nazeing make a strong case that Roger1 came from that area of Essex.