DOR-Terrill member Tom Roberts is by far the earliest DNA-tested person in our YDNA Roger "Modal Roger1" group. Tested early in 2002, he is the 3134th person tested at FTDNA. Over 300,000 persons have been tested there since. If you are wondering why Tom chose to get tested so early, it's because he wanted to know his paternal ancestry, yet he did not even know his paternal grandfather's name. In fact, it had only been two years since Tom had learned his father's name. Tom's mother did not marry his father, and Tom was given her surname and raised by her parents. When he became interested in family history he made great progress on his mother's side, but none at all on his father's. It was not until he obtained a copy of his full birth record that Tom learned his father's name. For a long time Tom did not realize that he could obtain such a record. In New York state, when you request a copy of a birth certificate, you are given a small green piece of paper which certifies that the person was born in NY on a certain date, in a certain place—and that's all. However, if you know to ask for a full record, you get much more. It was mostly out of idle curiosity that Tom finally went after his own full birth record. He was not expecting to learn his father's name, but there it was: Kenneth E. Cassidy.

So Tom began the search for his father, only to find that Ken Cassidy had died in 1990. Upon obtaining the newspaper obituary Tom learned that he had a half-sister, Ethel, to whom he then wrote. Ethel told Tom that she had lived with her father for some years, and that as far as she knew, he did not know the name of his father. Tom found Kenneth E. Cassidy in the 1910 U.S. Census, born just in time to be enumerated. Ken's mother, Ethel M. Cassidy, daughter of Andrew and Ann, was then 18 years old and single. They all lived together on a farm in Schroon (pronounced "Skroon"), New York, 85 miles north of Albany and about twenty miles from the Vermont state line. Tom has since found that Ken's mother died shortly after Ken was born, from childbirth complications. So Ken, like Tom, was given his mother's surname and raised by her parents. Tom obtained the full birth record for Ken, but in this case the father's name is not given. Although Tom was now able to trace another quarter of his ancestry (the Cassidy quarter) he found it impossible to learn the name of Ken's father. Having no other recourse, Tom resorted to genetic genealogy, without high hopes. It took seven years for the next turn of events.

Luckily, Tom turned out to be a very close yDNA match to us in the Modal Roger1 group. Our group is special, in case you didn't know it—we are a group of well-tested YDNA close-matches who all have basically the same surname, except for Tom. Many people who have been YDNA-tested to 25 markers or more find no one in their list of close matches with their own surname, even though there may be dozens of people on the list (of many different surnames). But Tom found himself a match to none but "Terrills." I (CWT) contacted Tom and told him that I suspected he and I were related.

So Tom knows that his father and his father's mother grew up in Schroon, and that his father was born there in 1910. Upon learning that he was a match to Terrills, the immediate questions were: 1) Were there any Terrills in Schroon in 1910?; and 2) If so, were any descended from Roger Terrill? It was easy to check the 1910 U.S. Census again and find that there were many Tyrrells in Schroon at that time. We thereupon conducted a study of all the census returns from 1790 to 1930 and found that all these Tyrrells were descended from a Benajah Tyrrell, who arrived in Schroon with his wife and children sometime between 1800 and 1810. But was Benajah Tyrrell a descendant of Roger Terrill? Again, Tom was lucky—Nancy Tyrrel Theodore had established this in 1995 (see the DOR-Terrill article "The Ancestry of Benajah Turrel, of Lanesborough MA in 1790."). Nancy traced the ancestry of Benajah in the church, probate, orphans court and land records of Newtown, a town in the Housatonic valley of western Connecticut, where Benajah was baptized on 21 Feb. 1762. Benajah5 Tyrrell was descended (Samuel4, George3, Daniel2, Roger1).

Benajah's father, Samuel, purchased land in Lanesborough, a then-new settlement in the Berkshire mountains of western Massachusetts, early in 1759. Other families from Newtown were settling there too. It may be that Samuel took a few years to prepare a home for his family in Lanesborough; or it may be that he moved his family there right away, and that Benajah was baptized on an occasion when the family returned to Newtown to visit relatives. But certainly Benajah grew up in Lanesborough, and married Rebecca ("Betsey") Wolcott, probably there or near there, probably around 1785. Their sons Wolcott, Rila ("Riley") and Stillman were born, probably there, in 1786, 1790 and c. 1792, respectively. Benajah and Betsey also had two or three daughters, one of whom was Salome, born about 1796, and one was very likely Laura G., born about 1788, who married a Thomas Potter in 1806. Benajah and family were living in Lanesborough in 1790; by 1800 they were living in Hoosick, Renssalaer County, NY, halfway between Lanesborough and Schroon; and by 1810 they were in Schroon, where they remained.

Benajah died in 1828, and he and Betsey were buried in a cemetery at Severance, a hamlet at the western end of Paradox Lake, two miles north of the village of Schroon Lake, in the town of Schroon. Benajah's farm was probably there at Severance. Almost all the Tyrrell men in Schroon in 1910 were descended from Benajah's son Rila. The two who were not were a 63-year-old son of Stillman, and his one-and-a-half-year-old son. There are five reasonable possibilities for Tom's grandfather—men between the ages of 16 and 32 in 1910, all of whom happened to be single, and all grandsons or great-grandsons of Rila. The other Tyrrell men then in Schroon were 48 or older (and all married), or else much too young. There's little point in discussing the five best candidates since there's no telling which were more probable. All we really know is that Tom's grandfather was very likely a Tyrrell, and that Rila Tyrrell, son of Benajah, was very likely Tom's grandfather's grandfather or great-grandfather. So there's a gap of two or three generations in Tom's paternal line, but most of the line is now quite certain. And Tom Roberts is a bona fide paternal line descendant of Roger Terrill.

Postscript: All of the work on which this article is based was done about a year ago. A couple months ago Tom's son Andrew discovered a new record in a database on Ancestry.com (Vermont Marriage Records, 1909-2008)—a record of Kenneth Cassidy's second marriage, in 1946. For his father's name, Ken gave the name of his mother's father, Andrew Cassidy. However, instead of giving his mother's name as Ethel Cassidy, Ken gave "Ethel Tyrell," perhaps because it would have seemed strange if his father's and mother's original surnames were identical. It may be that Ken did not know his father's given name, but apparently he knew at least that his father was a Tyrell. 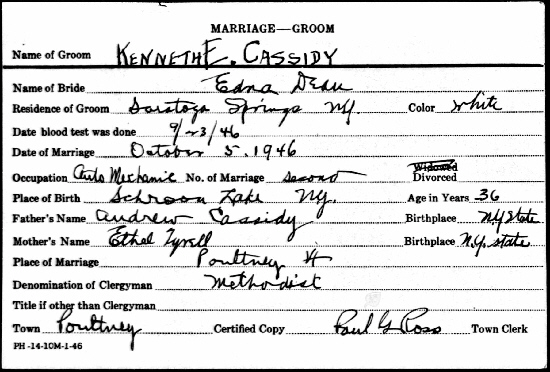