Although Roger1 Terrill's roots in the Old World aren't proven, he did leave some record of his life in New England.

In 1639, Roger1 was admitted to the Milford society along with eight other planters who were not "settled in the church." He rectified that status on 25 July 1644 when he joined the First Congregational Society at Milford, and Abigail "wife of Brother Roger Terrill" joined on 3 November of the same year. Although difficult to read from the copied microfilm record (LDS #1012263 Milford Congressional Church Records 1640-1675) below is from the surviving record for the year 1644: 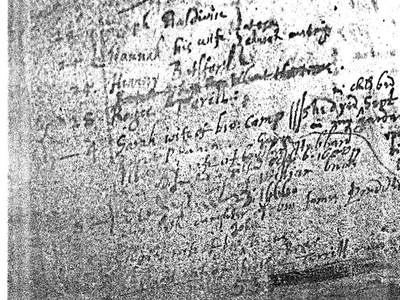 Roger1's name is in the center, and Abigail at the bottom although you can probably only make out "Terrill." Notice that Roger1's last name is spelled "Terill," different than Abigail's. This is not at all unusual as spelling was a haphazard business, usually left to the whim of the recorder of a record.

By 1645 most of the planters had erected frame houses in the old lean-to style, which were covered with rent-ash shingles. The settlement was surrounded with palisades twelve feet high enclosing a square mile. The palisades were needed because the Indians weren't friendly. In 1646 the Indians went on the warpath and tried to burn down the town by setting fire to the countryside. After this display of hostility, sentries were posted along the palisades, and each household was required to furnish one watchmen who did sentry duty every fifth day. Planters didn't venture outside of the palisades except in armed parties, and during this time of unrest the whole colony lived in fear.

In the center of the palisade enclosure they laid out home lots, and Roger1 had lot 49 below:

Milford is located on the inner coast of Long Island Sound where the Wepowaug river flows into the harbor. The cascading river provided the power for the first grist mill in all the New Haven towns.The Milford settlers were mostly from Essex, Hertfordshire and York counties in England. In 1639 there were approximately 200 settlers in Milford.

In historic Milford is a monumented and manicured boulevard park called the Milford Green around which was situated the early shops and homes devoted to business, and today is downtown Milford. Directly north of the Green is the original site of Roger1's almost three-acre home lot, which is approximately from the corner of Beardsley and Jepson Drive, along Jepson Drive to High Street. The land is now a part of the campus of Lauralton Hall, a private girls school.

Roger1 has a colorful land acquisition record. In the Milford Land Records (LDS #4918) we find in 1646 that he evidently had taken over land claimed by another and was duly reprimanded: "General Court at Milford December 24th 1646 decreed that Roger Terrell is to give back again, that land which is in his possession, which was laid out for Philip Hatley." Notice the "give back again".... Philip Hatley was Roger1's neighbor to the north, and evidently he found Hatley's land quite enticing. But, perhaps Roger1 had the last laugh as Philip Hatley left town in 1649.

Roger1's original home lot as described in the Records of 1646: "Roger Terrill hath two acres three roods and twenty poles be it more or less being bounded with a high way to the west, Phillip Hatley on the north with other lotts to the east and Sergeant Camp to the south." Many other acres of land were allotted to Roger1 for pasture, agriculture and possibly commerce as one of his grants of land abuts the "Comon" on the north and west.

One way that Roger1 and Abigail's children have been identified is through land records, with references such as "upland and meadow which was formerly my father's Roger Terrill late of Milford deceased."

Roger1 was a victim of thievery by an Indian in 1669 ("an Anchor with Perry" was a 10 gallon keg of pear cider). The New Haven town records show the following: †

"At a Towne-Meeting - January 27, 1669. Tomacke, an indian, being accused of stealing an Anchor with Perry from Roger Terrill of Milford and now examined, he Confessed ye fact, and was sent back to ye Authority of milford to bee dealt with according to law."

About 1639 (this approximate date is not proven but generally accepted) Roger1 married Abigail Ufford, daughter of Thomas and Isabel Ufford. Thomas was a "free planter" founder of Milford in 1639. He was from Nazeing in Essex, England and according to the Genealogical Dictionary of The First Settlers of New England, by James Savage, Thomas "came in the Lion arriving at Boston 16 September 1632 with wife Isabel, and ch. Thomas, John and a daughter who married Roger Terrill, but whose name is not seen." (More of Ufford in a later post.)

Evidently Roger1 had some standing in New Haven, for Thomas Ufford appointed him to represent his son, John, in an issue before the Court at New Haven in 1657. (Records of the Colony or Jurisdiction of New Haven by Charles Hoadley.) It seems John Ufford had gotten himself into a complicated personal situation by obtaining a divorce (something rarely granted) on a claim of impotence, only to then be charged with fornication with his father's servant, Martha Nettleton, when she turned up pregnant.

John was allowed to marry Martha, although the Court was miffed at being misled in the matter of his first marriage and subsequent divorce, and his conduct after. Considering the punishments such behavior usually received, Roger1 must have been quite persuasive with the magistrates.

1 - JOHN2, baptized August 1644 (more in a later post on this ancestor of Monroe County, IA Tyrrels).

2 - ABIGAIL2, baptized August 1644. By 1660 she had married William Tyler. They had twelve children born in Milford including twins born in 1670 who died "soon."

3 - HANNAH2, baptized August 1645. She married John Skeels of Woodbury, CT and they had their first child of record in November 1678. As a younger woman, in 1670, she had a "natural child" by Robert Hudson of Rye, New York. Hannah and John's first child, born in Woodbury, died young, but she had six other children. She died 11 November 1730.

9 - THOMAS2, born 23 October 1656. He removed to Elizabethtown, New Jersey, then to East Hampton, Long Island in 1688, and then Essex county, New Jersey in 1694 where he died in 1725. He was married twice, his first wife the daughter of Robert Dayton. His second wife was Mary Hampton. Thomas, a blacksmith, named four sons in his will.

10 - DANIEL2, born 1 March 1659/60, and died 10 June 1727. He remained in Milford and married first Mary, daughter of Thomas and Ruth (Clark) Fitch, and second, Abigail, daughter of Henry and Lydia (Brown) Bristol. He fathered ten recorded children, all by Mary Fitch.

Roger1 died in either late 1681 or early 1682 as there is an inventory of his estate dated 22 February 1682, taken by John Beard, John Sherman and Samuel Clark. It totaled 701 pounds, a considerable amount at the time. Here is one of two pages from his inventory so you can see how extensive the listing: 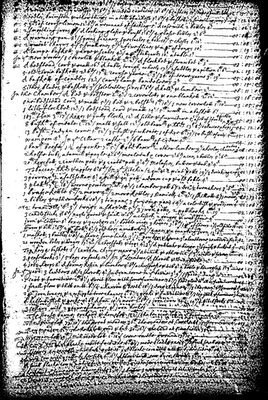 Abigail died in about 1694. Her burial place (and that of Roger as well) is unknown.

† The "correct spelling" (as if this concept had meaning in the 17th century) of "anchor" is "anker." It was a liquid measure of about ten gallons. Perry was a fermented, often effervescent beverage made from pears (online: The Free Dictionary: anker, perry). There are several mentions of "anchor" in the Records of the Colony or Jurisdiction of New Haven, from May, 1653, to the Union ..., by Charles J. Hoadly (Hartford: Case, Lockwood and Co., 1858); e.g., vol. 2, p. 207 : "... 6s 8d an anchor for liquors, and forty shillings a pipe for wine ...", and p. 214: "... there beeing not much aboue eight gallons to be drawne out of an anchor, wch costs them sometime fiue pound ...