Postscript to "A new look at our earliest Roger Terrill record"

Note: Click on an image to open a full-size version in a new window.

Just after we published "A new look at our earliest Roger Terrill record" a month ago, we notified Milford historian Richard N. ("Dick") Platt Jr. of our new theory concerning the 1639 list of nine (that the nine were a young crew selected to lay out the new town of Milford), because we were wondering if he had heard it before. Little did we suspect that we were writing to the person who happens to have ended up with E. R. Lambert's own copy of his 1838 book, History of the Colony of New Haven ..., annotated by E. R. himself. Dick checked the page concerning the list of nine and found that Lambert had crossed out the four lines preceding his transcription of that list (note that he added one name). 1

What caused Lambert to cross out those lines is not clear, but it's certainly clear that he was not happy with what he had written, and that he had had second thoughts. Perhaps he had realized that some of these nine may have been of the six Milford men (we don't know their names) who had been admitted as free planters even though they were not members of the church, a fact which caused Milford grief in 1643 when it wanted to join New Haven Colony in order to be part of the Confederated Colonies of New England (an alliance to protect the colonists as a whole from the Indians). 2 Or perhaps Lambert finally realized that the source of what he had written on p. 137 concerning Robert Treat was this very list of nine, and that if the list implied that Treat was one of those chosen to assist in surveying and laying out the new township, then it also implied that the eight others were those chosen along with him. Or perhaps Lambert crossed out the lines for some other reason.

Dick Platt was lucky in "inheriting" this book. He found it in a box of old books given to him by a Milford woman—books recovered by her son from a dumpster at the old Stowe Farm when it was being cleaned out prior to sale. 3 On the second flyleaf in the front of the book was written: "Omar W. Platt, #62 High St., Milford, Conn. This book was presented to me by the grand son of the author who stated that the pencil memoranda were made by his grand father." Above this was inscribed "E. R. Lambert," in handwriting which matches the author's signature as published on page 216 of his book.

Dick (who is not descended from Omar) has told us that Omar W. Platt (1874-1957) was considered to be the political boss of Milford in the first half of the 20th century. A graduate of Yale Law School, Omar had served four one-year terms as a Representative in the Connecticut State Legislature by age thirty. He was a Commissioner of the New Haven Superior Court from 1906 to 1919. He first served as Milford's Town Court Prosecuting Attorney in 1909, and as Probate Court Judge in 1913. Throughout the 1930's he was serving as Prosecuting Attorney, Probate Court Judge, president of The Milford Trust Company, president of Milford Hospital, president of Taylor Library, chairman of the Republican Town Committee, chairman of the Town School Committee, and president of the Milford Historical Society—all at the same time! On top of that, in 1936 he was appointed by the Town Selectmen to head The Tercentenary Committee, to guide preparations for Milford's 300th anniversary in 1939. 4,7,9

Omar and wife Charlotte ("Lotta," nee Baldwin) lived at 17 Wharf St. from 1910 to 1920. By 1924, and up to at least 1937, their address was 62 High St. (the address on the flyleaf of Lambert's book). And by 1939 it was 58 High St., as it remained for the rest of Omar's life. (Omar and Lotta probably lived in the same house all that time, with the address changing due to a street name change in the early 1920's and a house renumbering around 1938.) Assuming no time lag in the accuracy of the city directory information, and assuming that Omar signed the book just after it was presented to him, we can safely say that it was presented between 1920 and 1939. 4

From the information we have at hand we cannot definitively ascertain the provenance of Lambert's annotated book. But we think it most likely that E. R. Lambert signed Henry's name on the first flyleaf and gave him the book in 1852, perhaps because young Henry was showing an interest in historical matters. E. R. himself had started work on that project by his mid-twenties. Obtaining permission from the Town of Milford to examine the town records in 1834, he set to work right away on the task of repairing and transcribing them. In 1838, after completing his research and publishing the book, he began annotating his copy, and probably kept this up for a few years. But by 1852 he probably considered his work on the history of New Haven Colony finished, and left it to Henry to carry on if so inclined. (E. R. did, however, produce an excellent map of Milford in 1855.) Henry became a Bridgeport architect too—probably one as immersed in his work as his father had been. We think (see below) that the next custodian of the book was Henry's son Bertram, who became a distinguished physician-surgeon, whose "profession claims practically his entire thought and attention." 7,8


Omar Platt demonstrated acute interest in Milford historical matters as early as 1915, when the Town Hall was on fire. He used his authority to direct a fireman to play water from his hose onto the vault in the Town Clerk's office through an open window, and to keep doing so no matter what anyone else told him. This probably saved the ancient town records from destruction. And when the local chapter of the Daughters of the American Revolution founded the Milford Historical Society in 1930, Omar was chosen to head it, and held the position for twenty years. If the book was presented to Omar because he was president of the Milford Historical Society it may have been Edward who presented it near the end of his life in 1931 (Edward and his wife had no children). But we think the book was more likely presented after Omar became head of the Milford Tercentenary Committee, in which case it was likely Bertram who presented it. In 1936 the Committee began making preparations for the town's big anniversary celebration, and decided to commemorate the event with the publication of an account of the history of Milford. In Omar's words, "The Tercentenary Committee was fortunate in obtaining the services of the workers and writers of the Federal Writers' Project of the Work Projects Administration, first, to do the vast amount of necessary research work; then, to assemble the material, discriminating between fact and fiction; and, finally, to compose and complete this first History of Milford." Perhaps a member of the Project, seeking permission to reprint a map from Lambert's 1838 book, learned that a grandson of Lambert was living in Bridgeport, and upon visiting him was made aware of the existence of the annotated copy of the book. Hearing of this, Omar could have taken it upon himself to borrow the book to allow the writers to carefully check the annotation, in case it might be of benefit to them. A personal visit by the president of The Tercentenary Committee, along with very persuasive reasoning (Omar's forte) and the impressiveness of Milford's plans and capabilities, could have been enough to move Bertram to present the book on the spot (and he may have been leaning that way since the earlier visit). This presentation would have occurred in 1937 or 1938 when Omar was still living at 62 High St. Bertram was then about 53 years old and Omar was about 63. Omar would have added the note on the flyleaf to certify the authenticity of the annotation. 7,9 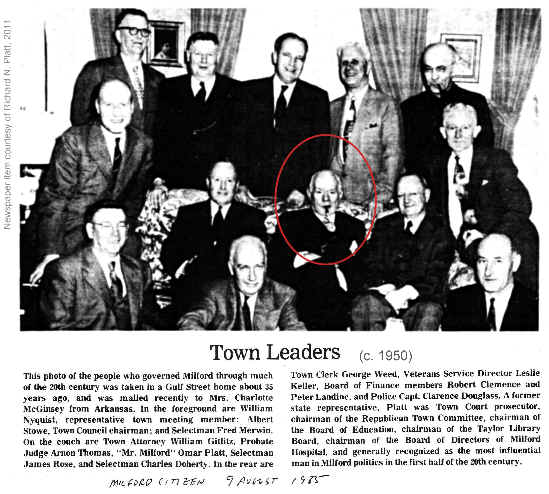 Whether or not we have the provenance right, we know that the grandson believed the annotation was that of E. R. Lambert himself, and we know that Omar Platt believed so, too. And we believe so. The Project writers made much mention of Lambert's book, but did not mention the annotated copy, which may have turned out to be of not much use to them, or perhaps they already had as much source material as they could handle. Most of the annotation in Lambert's book is rather sparse, except in the Lambert genealogy section. Aside from that section, the chapter on Milford contains most of the rest of it. If, as we believe, E. R. finished his annotation years before he gave the book to his son, it would not have been long after he published the book that he first had doubts about his interpretation of the list of nine.

1. History of the Colony of New Haven, ..., by Edward R. Lambert (New Haven: 1838). Available (unannotated) online at Internet Archive and Ancestry.com (requires subscription). In addition to the maps in his book, Lambert also authored an 1855 map of Milford (available in digital format from the Connecticut State Library)—his only other published work.

2. Records of the Colony and Plantation of New Haven, from 1638 to 1649, transcribed and edited by Charles J. Hoadly (Hartford, 1857), pp. 110-111. Available online at Making of America. This volume is the only source of which we know which mentions these six free burgesses who were not church members, and it does not name them.

3. The Cornelius A. and Sarah (Platt) Stowe farm at 66 Stowe Avenue in Milford was purchased in 2002 by the city of Milford, which is building a $7 million art colony there called the Stowe Farm Arts Center. See "Walnut Beach arts colony plan to be unveiled," New Haven Register, 17 Mar. 2008.

5. The biographical information in this paragraph is from: 1) U.S. Census records, 1840-1930, available online at Ancestry.com; and 2) Abbott (ref. 6), pp. 398-399, regarding Edward Rodolphus Lambert and Henry (Allyn) Lambert, available online at Google books and Ancestry.com. We have not been able to find an online sample of Henry Bertram Lambert's signature (but we think it was E. R. Lambert who wrote "Henry Lambert — 1852" on the flyleaf).

7. History of Milford, Connecticut, 1639-1939, compiled and written by the Federal Writers' Project of the Work Projects Administration for the State of Connecticut (Milford Tercentenary Committee: 1939), pp. v-vi, the foreword by Omar W. Platt (his signature on p. vi matches that on the flyleaf of Lambert's book), and p. 88, which mentions the town of Milford granting Lambert permission to examine the town records in 1834. Available online at Ancestry.com.