Note: Five volumes of the Records of the First Congregational Church of Milford were brought to the Connecticut State Library on 30 January 1930 by David A. Clarke, 5th, for his father, David L. Clarke, Clerk of the Church. These records begin in 1639 and come down to 1926.

While every effort was made through the decades to take proper care of these records, it was not untlil the early 1900s that they had the protection of any kind of safe. When they came into the custody of Mr. Clarke, he placed them in his safe located in his home. It was this safe which, when the Clarke home burned in 1922, preserved these invaluable records dealing with the religious life of from 1639. While some of the pages were badly charred, no part of the records were lost.i

Thus, the LDS film of these records is very dark in places, while as others have suggested, the handwriting, especially that of the second pastor Roger Newton, is difficult to decipher. Where the record is unclear, other sources were used to augment and complete the birth and/or baptism record for the children of Roger1 and Abigail (Ufford) Terrill.

All highlighted & underlined items are links to copies of original documents.

The book was probably brought from by Mr. Prudden - in the year 1637.

It had been used for an account book before it was applied to the present use - a number of leaves having been cut from the beginning as appeared before it was rebound.

Facsimile of figures on old cover.ii 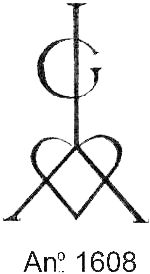 The pages in the record book are unnumbered, so the year is used as the identifying placement on the film.

February 11 .Thomas Uffitt him self. [admitted, father of Abigail Terrill]

. Pastor Prudden died in July of 1656. The First Church of Milford remained without a settled pastor after the death of Peter Prudden until records end in March 1656 and don't resume until July of 1660. Therefore, there is no record of baptism for Thomas2 or Daniel2 Terrill in this record.

iv. The American Genealogist, Vol. 25, p. 37 by Donald Lines Jacobus "The Terrill Family of Connecticut." It may be that Jacobus found this record in the original Milford First Congregational Church records, some of which is impossible to read in the film copy.

v. The American Genealogist, Vol. 9, pages 100-119, " () Vital Records" (= MV). The curly brackets indicate those parts for which TAG was uncertain of the accuracy of their transcription. The Barbour Collection has two records of Eleazer's birth, both giving 20 Sept. 1662 (MV 1:5 & MV OL:14). Obviously either the date of birth or the date of baptism is incorrect.